The Auto Industry: In Search of New Talent amid Changing Skills Requirements
Today's automobile production line requires highly skilled, flexible workers who can rapidly adjust to change.
Dennis Cuneo, Owner, DC Strategic Advisors LLC (2013 Auto/Aero Site Guide)
{{RELATEDLINKS}}Four years ago, during the depths of the Great Recession, American auto industry employment fell by nearly a quarter of a million. Two of the Detroit automakers and scores of suppliers filed for bankruptcy. The industry was in crisis, and virtually every auto plant in America curtailed production. Today, the auto industry is in full recovery mode. The dollar volume of the U.S. light vehicle market has recovered completely, and unit sales are fast approaching pre-recession levels. Automakers and suppliers have returned to profitability, and many have announced new investments and expansions since 2009.

On the employment side, the industry has added over 156,000 jobs since June 2009.1 Productivity in the auto industry is at an all-time high — roughly 40 percent higher than it was in 2000. Automaker and supplier companies are finding new ways to increase production in existing facilities by implementing operational improvements, relying on overtime and three-shift and three-crew operations, and making targeted investments to overcome facility bottlenecks. These improvements have made America a competitive place to make light vehicles and parts. The United States has attracted $29 billion in new automotive investment over the past three years2, and virtually every automaker that sells vehicles here has announced plans to expand in the United States. Today, the auto industry in America:

Despite restructurings and benefit cuts caused by the Great Recession, automakers still pay some of the highest wages in manufacturing, and the gap between the Detroit automakers and their European and Asian counterparts has narrowed considerably. GM, Ford, and Chrysler have a mix of lower-cost entry-level new hires and veteran workers, and the companies’ average hourly labor costs (wages + benefits) range from $52 to $60 an hour. Labor costs for the European and Asian automakers range from $40 to $62 an hour.11 While automotive employment is not likely to reach pre-recession levels, there are still substantial employment opportunities. As illustrated in the accompanying chart, the industry will add 30,000 new jobs over the next two years. 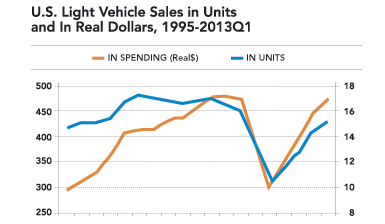 
Other job opportunities will be created by both the influx of new technologies in the automotive industry, and the expected retirement of tens of thousands of auto workers over the next decade. The industry will be hiring new engineers, technicians, and factory workers — and the skills needed for many of these jobs have changed.

The Skills Gap
Today’s automobile production line requires highly skilled, flexible workers who can rapidly adjust to change. In years past, the primary qualification for working on an assembly line was manual dexterity. Today, companies are looking for people who can work in teams, take initiative, and handle multiple jobs. The stereotype of an unskilled auto assembly line worker, who “checked his (or her) brains at the door,” no longer applies. There is a growing gap between incumbent worker skills and those that will be needed in the future.

The Center for Automotive Research regularly interviews human resource executives at the automakers and major suppliers, and recently asked how the 2008–09 auto industry downturn changed their approach to hiring and retaining workers. Here is a summary of the results:

Recent surveys of manufacturers show a “skills gap,” with nearly all auto executives concerned about the pipeline of future workers and their ability to work on the modern manufacturing floor. The skills gap is particularly acute among the skilled trades. Newly opened auto plants in the South often have to import skilled tradespeople from the Midwest, and the population of skilled tradespeople in Midwestern plants is rapidly aging.

A recent survey by Deloitte and the Manufacturing Institute found that 74 percent of U.S. manufacturers reported that work force shortages or skill deficiencies in the skilled production work force (machinists, operators, craft workers, distributors, technicians) have had a significant negative impact on their company’s ability to expand operations and improve productivity. Results from that same survey showed that 42 percent of manufacturers face shortages or skill deficiencies in the production support work force (industrial engineers, manufacturing engineers, planners) that have had significant negative impact on their businesses.12

The skills gap doesn’t end with blue-collar workers. For example, Ford Motor recently announced it will add 3,000 white-collar jobs to meet the new high-tech demands in the auto industry. The company has expressed concern about finding enough workers to fill those spots. Most of those new hires will be engineers and IT specialists needed to design the next generation of vehicles — vehicles that are being designed with infotainment systems, electronic controls, and safety systems.

Next: The Role of Human Resources in Site Selection

{{RELATEDLINKS}}Role of Human Resources in Site Selection
There are six critical factors that play into automotive site selection:

Other factors such as taxes, utility rates, and incentives are also important, but they can be negotiated –— these six factors are “set” and not easily remedied in the short run. The first three factors relate to human resources and educational assets — and any state or region that seeks to maintain or enhance its automotive footprint would be well-advised to assess its work force skills and educational assets and take the necessary actions to improve them.

The Center for Automotive Research is engaged in two programs that address these issues: the Automotive Communities Program (ACP) in the Great Lake States and Southern Automotive Research Agenda (SARA) that was recently initiated in the South. The ACP was initiated over 13 years ago, and concentrates on the long-term viability and sustainability of the auto industry and the communities in the Great Lakes States, which are the historic home of the auto industry. SARA was initiated in 2013 in response to needs expressed by several state economic development agencies in the South.

SARA will examine the critical success factors necessary for continued growth of automotive investment in the South, including the skills of the work force. The results will identify common challenges and opportunities for action that are consistent throughout the region, including work force development and engagement of education and research institutions. The study will identify synergistic opportunities to align the region’s manufacturers and build stronger ties among industry, academia, and economic development organizations.

In Sum
The auto industry, which recently went through a painful restructuring, is in a hiring and growth mode. Companies, however, are struggling to find the needed talent, as the industry’s human resources needs have changed. Indeed, finding the requisite skilled work force is probably the auto industry’s greatest challenge. Those communities and regions that can supply that talent will have a significant advantage in retaining and attracting automotive investment.