Canada — Greater Than the Sum of Its Parts
A combination of beneficial attributes across a diverse industrial and geographic landscape has made Canada a global economic leader and attractive place to invest.
Mark Crawford, Staff Editor, Area Development (Location Canada 2013)
{{RELATEDLINKS}}Canada’s economy continues to rock. By just about any standard, Canada’s economic performance dominates the G-7 and the G-20, thanks in part to its economic diversification. Not only is Canada well-known for its traditional industries of mining, energy, lumber, agriculture, and fisheries, but its knowledge-based sectors like biotechnology and life sciences, nanotechnology, advanced manufacturing, information and communications technology (ICT), and aeronautics have gained international reputations as well.

Why does Canada have such a track record of success? The biggest factor is the Canadian government’s commitment to create a fertile business climate that is supported by a number of competitive advantages, such as low business costs and corporate tax rates, a highly skilled and educated work force, strong R&D incentives, and a stable banking environment. When integrated together, these advantages create a climate that supports innovation, business growth, and diversification. Robust, long-term public-private partnerships among federal and provincial governments, academic institutions, and private-sector companies have resulted in the development of strong industries that are achieving change on a global level. 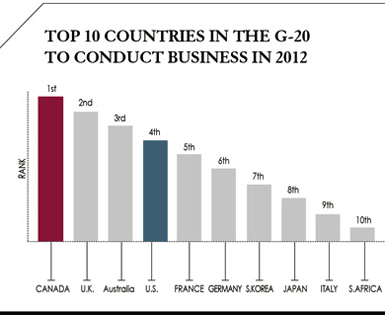 
Fiscal Stability
Corporations want to invest in a country that has a solid track record of fiscal stability and reasonable, predictable economic management — which starts with government. Canada is one of the most financially stable countries in the world. With the lowest debt-to-GDP ratio in the G-7 in 2011, Canada expects to hold this leading position through the 2012–2013 forecast period. 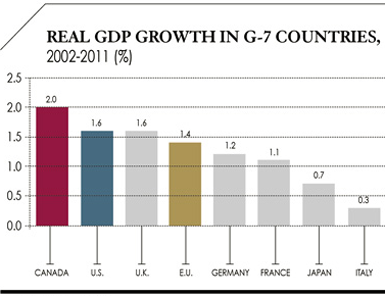 
For the fifth consecutive year, the World Economic Forum (WEF) has declared Canada’s banking system to be the soundest in the world. This was also proven by the Great Recession — during the financial crisis, not a single Canadian bank or insurer failed, and none required bailouts. In addition, according to Global Finance magazine, six of the top 10 safest banks in North America are Canadian. Standard & Poor’s has also reaffirmed Canada’s AAA credit ratings — all of which confirm that it’s very hard find a better place to invest business capital.

Talented Work Force
As indicated by the Organization for Economic Co-operation and Development (OECD), Canada’s work force is one of the most highly educated in the world, with half its working-age population holding at least a high-school education. Canada also has the highest percentage of individuals achieving at least college or university education among OECD member countries. The overall skill level of Canada’s work force is also tops. For example, the availability of qualified engineers in Canada is the highest in the G-7, according to the Institute for Management Development (IMD).

A highly skilled work force is a big reason the ALTEN Group — a French engineering firm that specializes in aerospace, telecommunications, life sciences, and auto manufacturing — decided to establish its Canadian headquarters in downtown Montreal, with plans to create 200 high-tech jobs within three years.

“Montreal has a big pool of talent that we can tap, with its top-notch universities and engineering schools, and this is a key to developing our Canadian presence,” says Maxime Leca, managing director of ALTEN Canada. “The region excels in several cutting-edge technology fields, and the business environment is also very positive.”

Canada also does a great job of creating a leadership pool to manage its talented workers — the WEF ranked Canada second in the G-7 for the quality of its management schools. Six Canadian schools of management are also ranked among the top 100 in the world according to the Financial Times (UK) Global MBA rankings for 2013. In addition, according to a study that measured the extent to which management education meets the needs of the business community (World Competitiveness Yearbook 2012), Canada ranked first in the G-7.

Business Competitiveness
KPMG’s 2012 Competitive Alternatives study indicates Canada has the second-lowest business costs among G-7 countries and a 5 percent cost advantage over the United States. Key drivers are as follows: 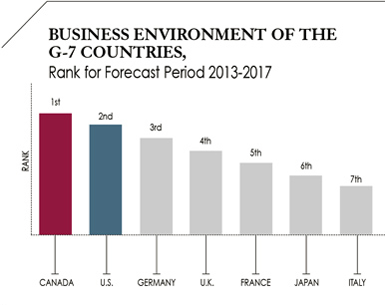 
Therefore, it is not surprising that Canada is considered to be the best place to do business in the G-7 over the next five years, according to the Economist Intelligence Unit. It also ranked fifth overall out of 82 countries in the Economist Intelligence Unit’s global business rankings for the forecast period 2013–2017. And Canada led the G-20 and stood fifth overall in Forbes latest (November 2012) 141-country annual study on the “Best Countries for Business.”

Research and Development
Canada currently offers one of the most favorable tax treatments for R&D among the G-7 — especially for biotechnology, pharmaceuticals, and advanced manufacturing. Canada provides a system of tax credits and accelerated tax deductions for a wide variety of R&D expenditures. Eligible costs include salaries, overhead, capital equipment, and materials. These tax-based treatments allow companies to significantly reduce their R&D costs through direct investment or sub-contracting in Canada. The nation’s generous R&D tax incentives save companies, on average, 30 cents on a dollar invested in R&D in Canada. R&D-intensive sectors also enjoy the lowest costs in the G-7, these being about 10 percent lower than in the United States.

Angiotech, a pharmaceutical and medical device company founded in 1992 by then-medical-student William Hunter, can attest to the support of the National Research Council’s Industrial Research Assistance Program (NRC-IRAP) in helping his company turn scientific ideas into groundbreaking treatment solutions — including a product that has been implanted in over four million patients in the world. “The role of the Canadian government in supporting private-sector research through programs such as the NRC-IRAP is extremely important for supporting our culture of innovation,” says Angiotech’s CEO Hunter.

“Our government understands that Canada’s long-term economic competitiveness in the emerging knowledge economy needs to be driven by globally competitive, high-growth businesses that innovate and create high-quality jobs,” says Prime Minister Harper. “We will provide the resources needed to put Canada’s venture capital industry on the path to sustainability and ensure Canada’s high-potential firms have the resources they need to succeed.”

{{RELATEDLINKS}}Economic Performance
According to Consensus Economics, Canada was a top performer among the G-7 in GDP growth from 2009 to 2012. Similarly, recent OECD statistics also rank Canada as a top performer among G-7 countries and further predict Canada’s economy will continue to be an international leader through the 2013–2014 forecast period. Canada has stormed back from the Great Recession, recovering more than all the output and the jobs that were lost during the downturn.

Over the past decade, Canada has witnessed a substantial growth in both inward and outward foreign direct investment (FDI), reflecting its international reputation as a good place to do business, as well as its strong connections to global supply chains. Canada was the second-largest recipient of global FDI inflows per capita in the G-20 from 2007 to 2011. Canada’s inward FDI stock reached C$607 billion in 2011, almost twice what it was in 2001. Expansion of Canada’s outbound FDI — its direct investment abroad — is equally impressive, increasing from about C$400 billion in 2001 to almost C$700 billion in 2011.

Much of Canada’s economic success is a result of its long-established trading relationships with the United States and Mexico, all of which can operate on a modern, well-integrated transportation system that is one of the best in the world. As a member of the North American Free Trade Agreement (NAFTA), Canada has access to more than 450 million consumers and a combined GDP of about $18 trillion — the most lucrative market in the world.

The U.S. is Canada’s number-one trading partner. Many Canadian manufacturing centers are actually closer to U.S. markets than American production sites — for example, 17 of Canada’s 20 largest cities are within a 90-minute drive of the United States. Automated permit ports, transponder identification systems, and joint processing centers are among the innovative tools that Canada is using to facilitate the flow of goods and services across the border. 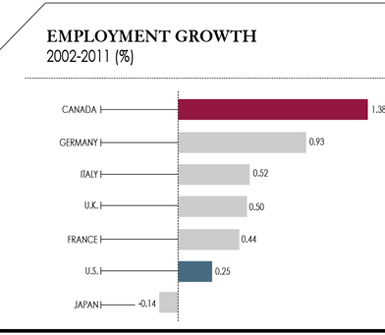 
Canada also continues to strengthen its trade relationships with Asia-Pacific markets and European centers. For example, Canada will soon finalize a trade agreement with the European Union (EU), its second-largest trading partner. With more than 500 million consumers and a GDP of over $17 trillion, the EU is the world’s largest integrated economy. A trade agreement with the EU will be Canada’s most significant trade initiative since NAFTA and bring strong economic benefits, especially for Atlantic Canada and the province of Quebec.

“Our government is committed to jobs, growth, and long-term prosperity,” states the Honorable Ed Fast, Minister of International Trade. “Quebec’s chemicals and plastics industry is one of the province’s largest manufacturing sectors, employing tens of thousands of people. EU demand for value-added and specialty products is growing in a wide variety of areas. Quebec’s strengths and expertise in this sector mean that its companies are well placed to meet this demand in the lucrative EU market.”

Quality of Life
Canada is a land of immense natural splendor that provides its citizens with affordable living and healthcare, excellent education, and an abundance of opportunities for professional and personal growth.

According to the 2012 Legatum Prosperity Index, Canada ranks first in the G-7 and sixth among 142 countries in terms of overall prosperity — determined by 89 variables in eight categories: economy, entrepreneurship and opportunity, governance, education, health, safety and freedom, personal freedom, and social capital. 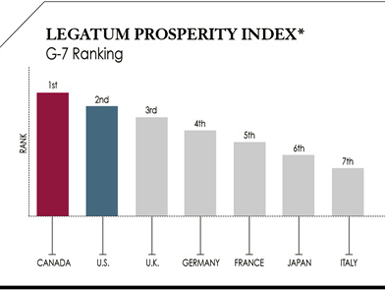 
In 2012 the World Bank stated that Canada had the highest standard of living in the G-7 and the second highest in the G-20, as measured by gross domestic product (GDP) per capita. According to the OECD, Canada has the second-highest quality of life in the G-7 and one of the lowest income disparities when compared to other G-7 nations. The Reputation Institute ranks Canada as having the highest reputation ranking among 50 countries based on several indicators, including a high quality of life, a safe place to live, an advanced economy, an effective government, and an appealing environment.

Canadians appreciate multicultural diversity and welcome immigrants from around the world. In fact, Canada has one of the world’s most multilingual societies with over 200 languages identified as the mother tongue. Some of the world’s most cosmopolitan cities, including Toronto, Vancouver, and Montreal, add diversity to Canada’s vibrant social landscape, as well as outstanding educational and employment opportunities.

In March 2013 Toronto became North America’s fourth-largest city with an estimated population of 2.8 million (only Mexico City, New York City, and Los Angeles are larger). Toronto’s population is growing by about 40,000 people every year, drawn by the wealth of social and economic opportunities it offers.

“We are attracting people from across North America and other parts of the world,” says Toronto Mayor Rob Ford. “These figures show that Toronto is one of the most desirable locations for people to live and work.”