High-tech R&D, commercialization, and manufacturing are anchored in high-tech clusters in major cities across Canada. Common features among these clusters are federal and provincial initiatives and funding, strong research programs, collaborations with academic institutions, and incubator resources for small high-tech startups. This kind of pro-innovation environment is especially attractive to major foreign investors who want to enter a market, become key players, and minimize their learning curves. Thriving high-tech clusters also attract world-class talent from overseas.

Much of Canada’s high-tech development and commercialization takes place in seven key clusters surrounding Vancouver, Calgary, Winnipeg, Toronto, Waterloo, Montreal, and Halifax. The companies in these clusters recognize that by working together and supporting each other they bring more attention and prosperity to all — and perhaps even make a discovery that changes the world in a spectacular way. 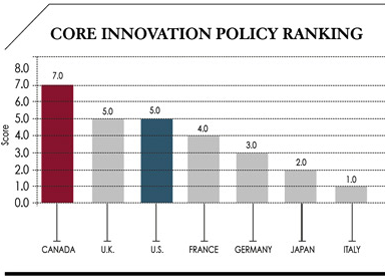 
From Conventional Energy to Clean Tech
Alberta is home to more than 60 percent of the country’s conventional crude oil reserves and all of its heavy oil and oil sands reserves. Many of the world’s largest international oil and gas companies have established headquarters in Calgary, driving almost $75 billion in energy-related projects across the province.

Although oil and natural gas are the major energy targets, Calgary is also the base for a steadily growing Sustainable and Renewable Energy (SURE) sector. The city has been successful in attracting national research initiatives that are exploring new ways of controlling greenhouse gas emissions and increasing efficiencies of renewable energy and energy systems and technologies. Collective energy knowledge and advancements in technology, along with the support of many research and postsecondary institutions, think tanks, and innovators within government and industry, are driving collaboration within the SURE cluster.

Ranked as one of the world’s most cosmopolitan cities, Vancouver also has one of the largest clean-tech industries in North America. The National Research Council (NRC) of Canada, which was recently ranked as one of the top organizations in the world for its fuel cell research, conducts much of this work at its state-of-the-art center in Vancouver.

In true cluster behavior, the presence of NRC, along with the Innovation Clean Energy Fund, which provides funding to companies with promising renewable energy technologies, has brought strong growth in this sector. Vancouver is currently home to 25 percent of all clean-tech companies in Canada. One of these leaders is Ballard Power Systems, a manufacturer of proton exchange membrane (PEM) fuel-cell technology that is being used across an increasingly wide range of applications and industries. For example, Nokia Siemens Networks recently partnered with Ballard Power Systems — a collaboration that “allows us to leverage our expertise to deliver an emergency-ready alternative power solution for mobile networks during outages caused by natural calamities and commercial grid failures,” says Larry Stapleton, vice president of sales at Ballard Power Systems.

An ICT Leader
With 30 percent of Canada’s 40,000 ICT firms, Toronto, Ontario, is also one of the largest ICT clusters in the country. In September 2012 Toronto-based IBM Canada, in collaboration with the federal and provincial governments, opened its IBM Canada Leadership Data Centre in nearby Barrie — one of the most advanced computing facilities in the country and part of the company’s $175 million IBM Canada Research and Development Centre network.

Also in Ontario, the Waterloo region known as the Technology Triangle, which consists of the cities of Cambridge, Kitchener, and Waterloo, has become a preferred destination for technology start-ups, incubators, accelerators, and young inventors. High technology in the “Triangle” is supported by three acclaimed universities, a college, and more than 150 research organizations, including the Perimeter Institute (where physicist Stephen Hawking is a Distinguished Research Chair) and the Institute for Quantum Computing. More than 22 percent of all spin-off Canadian information technology companies have gotten their start in University of Waterloo incubator programs.

And over half of Alberta’s fastest-growing companies are in the ICT sector, which includes information technologies, electronics, telecommunications, and wireless. An important asset for Calgary-based ICT companies is Innovate Calgary, a partnership between Calgary Technologies and University Technologies International. This full-service organization provides technology-transfer and business-incubator services to advanced-technology businesses, entrepreneurs, and researchers. Started in 2010, Innovate Calgary has evaluated over 1,500 discoveries, secured nearly 700 patents, and developed or assisted in the creation of over 40 spin-off companies.

Winnipeg, Manitoba, was recently chosen as the site of a new cloud computing center owned and operated by Canadian Tire Corp. The facility will be home to a digital content warehouse, application and testing labs, and a high-performance data center. Winnipeg’s burgeoning technology community, media-savvy graduates, and reputation as a gaming hub were among the factors influencing the location decision. The province of Manitoba also offers a data processing tax credit.

Life Sciences Clusters
Toronto’s biotech cluster is the largest in Canada, with established headquarters for nearly 50 global pharmaceutical and biotechnology companies, as well as numerous research facilities. A new addition is Sunnybrook Research Institute’s recently opened Centre for Image-Guided Therapeutics. The $160 million, 150,000-square-foot facility provides space for more than 300 research and clinical teams that are working in partnership with 30 leading biotechnology companies and other organizations on new devices and treatments.

The Greater Montreal, Quebec, region, is a major world center for biotechnology. The largest amount of biotech R&D in Canada is conducted in Montreal, including work on aging, neuroscience, cancer, cardiovascular and metabolic diseases, genetics, genomics, and proteomics. In 2011 Montreal ranked sixth among North America’s largest metropolitan areas in life sciences employment. Over $1.6 billion in venture capital was invested in Montreal’s life sciences industry between 2001 and 2011.

Greater Montreal is where many internationally recognized biotechnology companies are headquartered, including Alethia Biotherapeutics, Bio-K Plus International, and Caprion, a leader in proteomic services. Caprion has experienced growth of 35–40 percent over the past few years, a trend that should continue as the company develops its own diagnostic tools for cancer and other diseases.

“Greater Montreal has a significant pool of talent trained in the scientific disciplines that are critical for our success,” indicates Martin Leblanc, president and CEO of Caprion. “It also has people with vital management and business development skills. What we have is a complete ecosystem, a unique cluster in North America that brings together players capable of collaborating and adopting common strategies.”

Halifax — a major port and the regional growth engine for Nova Scotia and the Atlantic Canada region, as well as one of the most competitive Canadian cities for doing business — supports another life sciences cluster. For example, the Brain Repair Centre, based at Dalhousie University, is an internationally acclaimed partnership that brings together more than 100 world-class researchers and physicians to find treatments for Parkinson’s, Alzheimer’s, spinal cord injury, and other brain disorders. Halifax is also home to a world-class marine research cluster that includes Defense Research and Development Canada; the Bedford Institute of Oceanography, Dalhousie University; and Lockheed Martin’s Technology Collaboration Center.

Manitoba’s biotechnology sector is one of the fastest-growing in Canada, with a focus on biomedical R&D and agricultural biotechnology. Winnipeg is home to the National Research Council’s Institute for Biodiagnostics, Canada’s most advanced research facility for developing nuclear and other magnetic resonance imaging technologies.

{{RELATEDLINKS}}Advanced Manufacturing
Although the Waterloo, Ontario, Technology Triangle is best known for ICT, it is also a center for automotive manufacturing and research and development. The Waterloo Centre for Automotive Research at the University of Waterloo is one of Canada’s top automotive research centers. Employing more than 75 automotive researchers, the center represents the largest university-based automotive activity in Canada and works in partnership with automotive manufacturers and suppliers, including Toyota Motor Manufacturing Canada, which operates an assembly plant in Cambridge.

“Manufacturing is all about people, and I believe that we have some of the best people in the world right here in Ontario,” says Ray Tanguay, chairman of Toyota Motor Manufacturing Canada. “That is one reason we have been so successful.” Canada’s 400-plus aerospace manufacturing and services companies have a worldwide reputation for quality, value, performance, and reliability. In 2011, Quebec exported nearly $7 billion worth of aerospace products, accounting for almost two-thirds of Canada’s total aerospace exports.

Montreal is Canada’s largest aerospace cluster and is well known for its expertise in aircraft fabrication and assembly, engine manufacturing, avionics, maintenance and repair, and landing gear. Major aerospace companies in Montreal include Bombardier Aerospace, Bell Helicopter Textron Canada, and Pratt & Whitney Canada. Montreal is also home to more than 10 aerospace research centers, including the Canadian Space Agency and the Aerospace Manufacturing Technology Centre (AMTC) at the NRC Institute for Aerospace Research.

In March 2013 Bombardier Aerospace announced it plans to test-fly its new CSeries of aircraft this summer. Designed for the growing 100- to149-seat market, this new family of airplanes combines advanced materials and leading-edge technology, such as Pratt & Whitney’s new PurePower® Geared Turbofan™ engine, which recently achieved Transport Canada type certification and will power the CSeries aircraft. These planes will be up to 12,000 pounds lighter than other aircraft in the same seat category and provide passengers with a best-in-class, wide-body cabin environment. At the end of 2012, Bombardier had booked nearly 400 orders and commitments for the new line of aircraft.

“The CSeries is a game-changer in a changing economic environment,” says Mike Arcamone, president of Bombardier Commercial Aircraft. “Specifically adapted for airlines that want to increase the productivity of their aircraft, the extra capacity seating option allows us to offer the highest seating capacity in its market segment, with the best-in-class seat mile costs and comfort.”

Another major focus in today’s aerospace sector is composite manufacturing. Boeing, Magellan Aerospace, and Advanced Composite Structures all have operations in Winnipeg, Manitoba, with Boeing’s composite manufacturing facility the largest of its kind in North America. Winnipeg is also home to the Composites Innovation Centre (CIC), a public-private partnership that supports R&D for new composite materials and technologies for manufacturing industries. Researchers are investigating how agricultural fibers such as hemp and flax can be incorporated into composite materials to manufacture parts that are lighter weight, cheaper, and more sustainable to make. If successful, these “biofibers” could even replace fiberglass in engineered plastics. The CIC also plans to develop the first-ever grading system for biofibers, as well as develop a database for this information.

“It is essential to understand the quality of these biofibers to ensure consistency,” says Simon Potter, sector manager for product innovation at the CIC. Once the database is completed, CIC could become the leading biofiber-testing facility in the world.

And also in Manitoba, GE Aviation is expanding its $50 million, 122,000-square-foot cold-weather engine-testing facility in order to make it functional year-round. The “one of a kind” facility just opened in 2012 on the campus of Winnipeg’s international airport, which is located within the CentrePort footprint. (CentrePort is Winnipeg’s inland port.)