E-Commerce Changes Logistics and Incentives Landscape
The evolution of the e-commerce channel will have an ongoing impact on distribution facilities and those markets with the required infrastructure and incentives that e-commerce companies seek.
John Morris, Executive Managing Director, Americas Industrial & Logistics Leader, CBRE (Directory 2014)
{{RELATEDLINKS}}E-commerce is changing retailing and, by extension, associated retail and industrial real estate. The changes go beyond the evolution of the traditional storefront to the very core of our industry — the supply chain and the facilities supporting it. Indeed, e-commerce as a percentage of the retail pie had grown from almost nothing to nearly 5 percent in 2012, a percentage that is expected to continue to grow in the years ahead.

While 5 percent may not seem like much, “retail” includes the purchase of such big-ticket products as automobiles and other durables — anything classified as such. But digging deeper into products with a larger impact on the warehouse/distribution supply chain — a category called GAFO, the classification for general merchandise — Internet and catalog sales now comprise more than 25 percent, according to the latest figures.

The number of new warehouse projects — either exclusively or significantly catering to electronic fulfillment — has increased dramatically for real estate service providers. That includes projects designated strictly for such e-commerce giants as Amazon or for such multi-channel retailers as Wal-Mart, Target, and Nordstrom. It is interesting that, in an economy where growth is generally characterized as limited, the amount of real estate being developed and leased is so high. The increasing requirements are not so much about a boost in consumption, but rather a change in how we buy and what we expect from the experience.

The New Generation Warehouse
The definition of the “ideal” distribution center is a fast-moving target. To begin with, the new generation warehouse is measurably different in a physical sense, and older spaces are difficult to retrofit for the e-commerce channel. For example the latter requires a higher cube: 32 feet is often the bare minimum, and there is growing interest in 36- to 40-foot clear ceiling heights.

This new generation warehouse is also far more automated, requiring more of what are termed “pick faces.” In other words, it is required to have more items available for the interface between the warehouse worker and the items being “picked” to fulfill an order. This new generation warehouse is not just about pallets, but also about reaches and cases. A certain percentage of a building will still be utilized for storage, but for electronic fulfillment, a substantially bigger percent of the space will be needed to pick and less to store.
Expand 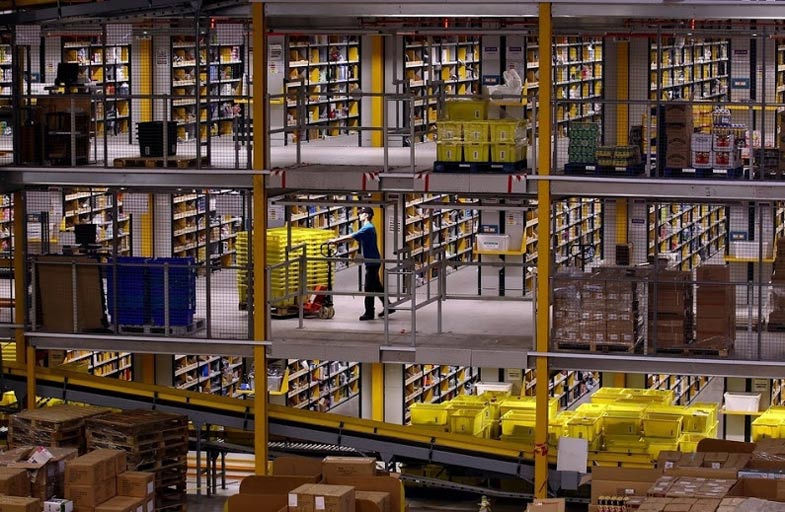 Amazon Fulfillment Center; Source: imgur
The number of dock doors per square foot will also be greater to facilitate shipping more, but smaller orders, more frequently. Also, a higher number of car parking spaces is expected to be necessary to meet the manpower needs for e-commerce, as the handling per item is higher. E-commerce is a substantially greater job creator relative to traditional warehousing/distribution, at least at this time.

Site Selection Needs
When it comes to site selection needs, warehouses significantly utilized for e-commerce require closer proximity to population centers, aligning with such issues as the growing urbanization and higher levels of service sought and fostered by a younger generation of consumers. E-commerce orders are increasingly destined for urban consumption, and the remote, less costly locations favored for traditional warehouses used for bulk shipment aren’t always ideal for this new use. For modern product distribution, the mantra “pallets to stores” is now “boxes to doors,” a reference to the fact that a growing percentage of what people buy is shipped directly to homes one item at a time, bypassing the retail store.

With the increased automation and changing building specifications, and the need to locate on more expensive real estate near urban centers, the facilities themselves have become more capital-intensive. Given this trend, e-commerce companies will increasingly focus on ways to offset one-time and recurring project costs; this is often accomplished through the procurement of economic development incentives provided by state and local governments.

Job Creation & Work Force Training
State and local economic development efforts are focused not only on growing the existing labor force organically, but also on providing opportunities for new jobs to the existing work force. Given that many areas across the country continue to have record unemployment and underemployment levels, the urgency to attract quality employers to these areas has never been more critical.

The recent dynamic of siting e-commerce operations closer to evolving target markets has created new distribution hubs in areas that were previously not considered; as a result, these operations are sometimes among the largest employers in those areas, given the capital- and headcount-intensive nature of the projects. Hence, ramping up state and local economic development efforts to attract these projects has increased significantly over the last few years.

An important form of assistance for e-commerce facilities is the work force development assistance that a state and local government can provide to recruit, screen, and train the local work force to match the skill sets necessary to operate an efficient operation. Work force development incentives create an ideal public-private mechanism through which state and local entities share in training costs with a particular employer. The training that the employer requires helps to educate the existing work force, thus enhancing its qualifications and positioning it for future projects requiring similar skill sets. Worker credentials are important for an e-commerce facility because of the very nature of the advanced technology typically utilized to operate such facilities.

Tax Incentives
Indeed, while many economic development incentive programs target job creation — and this new generation warehouse does create more jobs as compared to a traditional warehouse/distribution facility — incentive programs aimed at attracting large capital-investment projects, e.g., investment tax credits, will also continue to be of importance. The potential benefits to a project in terms of tax credits depends on the structure of the credit (i.e., refundable, salable, carry-forward provisions, etc.) and on the actual state and local income apportionment methodology.

Given the specific real estate requirements of e-commerce facilities, many markets do not have existing real estate product that would be best suited for such operations. As a result, many e-commerce projects require new construction, i.e., build-to-suit. These projects generally provide net new fiscal impacts to a state and local community in the form of sales tax, real property tax, personal property tax, and inventory tax, among others, depending on the location. Because of the net new fiscal impacts generated by an e-commerce project, communities may choose to be more business-friendly in providing incentives to help mitigate new taxes generated by a project, which would still provide the state and local community with net new revenue attributed to the project.

One caveat on sales taxes attributed to e-commerce: the issue of how to tax online sales continues to be inconsistent across the country and has become more and more complicated. The debate around online-sales tax is often referred to as the “Amazon tax” after the giant online retailer. In simple and general terms, for a business to be subject to a sales tax, a number of conditions have to be triggered, among them something called nexus. For example, if a retailer has a bricks-and-mortar store in a particular community, the business has a clear nexus to that community and would be required to collect and pay a sales tax. Establishing nexus for online retailers, however, is more complicated because they generally do not have a bricks-and-mortar presence. As a result, a few states have decided to interpret their specific sales tax code definitions of nexus to include online sales even for those businesses that don’t have a bricks-and-mortar presence in their state.

Infrastructure Improvements & Entitlement Zones
Real estate improvements in new markets also create an opportunity to improve the public infrastructure (e.g., road, rail, utilities, public services) leading to a site by tapping into federal grants or state department of transportation funding, which target project-related activities. The intent of infrastructure incentives is to improve, expand, or refurbish a site’s infrastructure from which the public can benefit. The site can then be positioned for further development, while providing the necessary amenities for a project to select that site.

Other potential economic development benefits can be derived from entitlement zones administered at the state level, notable because they typically provide benefits that would not be available to users outside of such a zone. Entitlement zones were established with the intent to drive businesses to distressed parts of a state in areas that are more rural in nature or have been hit by major industry shifts. Select entitlement zone benefits, depending upon locale, can provide per-job tax credits for companies hiring people who actually live within the zone. Also, in those states that tax utilities, there may be opportunities to exempt that tax for a user, while other zones exempt the sales taxes on consumable materials.

Although economic development incentives are driven primarily by jobs, wages, and investment, some states do consider warehouse/distribution, i.e., e-commerce facilities, a targeted industry, which makes these facilities eligible to be considered for certain incentives that are unavailable to other industries.

Adding It Up
How significant is the evolution of e-commerce and its impact on the supply chain from a real estate standpoint? As an indicator, our firm’s involvement with several key clients in e-commerce real estate alone involved over 40 new facilities nationally in 2012, with many more coming online in 2013. Target, Wal-Mart, Nordstrom and others have current electronic fulfillment or e-commerce requirements in the market today, and their number is growing daily.

The evolution of the e-commerce channel will have an ongoing impact not only on the distribution facilities themselves from a construction and functional standpoint, but also on those markets with the prime locations, infrastructure, and incentives that e-commerce companies seek to remain competitive. It is anticipated that developers and engineers, as well as states and communities, will continue to ramp up the programs they offer to support a growing and increasingly competitive landscape for this evolutionary business.