Automation Propels U.S. Manufacturing Forward
Manufacturers are turning to automation as a means to improve quality, productivity, safety, speed, and competitiveness, while reducing costs.
Beth Mattson-Teig (Q4 / Fall 2013)
{{RELATEDLINKS}}Step into any major manufacturing facility in the United States today and it is clear to see that the “future” of advanced manufacturing is already here. Innovative technology at work is evident in tools such as robotic arms, programmable logic controllers, and CNC machines that are helping to produce everything from cars to computers.

Such automation is taking root and changing the face of manufacturing among companies both large and small. Case in point is Baltimore-based Marlin Steel Wire. A decade ago, employees were bending wire by hand to make steel baskets. Owner Drew Greenblatt saw demand plummet as the company’s primary clientele, bagel shops, shifted their orders to cheaper Chinese manufacturers. “He made the decision to transform his business and invest in automation to build baskets for many different industries,” says Bob Doyle, a spokesperson for the Association for Advancing Automation.

Today, Marlin Steel Wire makes baskets for the automotive, aerospace, and pharmaceutical industries. Those clients have significantly higher design specifications compared to the bagel shop owners, notes Doyle. “The only way [Marlin Steel Wire] could do that was to invest in automation, both in robotics and other types of manufacturing technologies,” says Doyle. Marlin Steel Wire has since grown from 15 to almost 30 employees. The higher-skilled jobs also pay higher wages and benefits. “That is just one example of a small company that has really seen the benefits of investing in robotics and automation,” he adds. 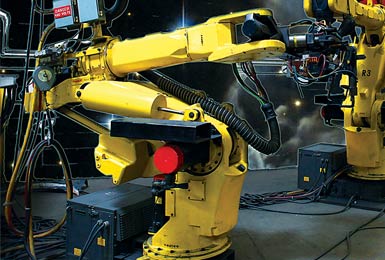 Manufacturers across the board are increasingly turning to automation as a means to improve quality, productivity, safety, speed, and competitiveness, and to reduce costs. The shift has been a boon to the robotics industry. In fact, 2012 set a new record for the North American robotics industry, and sales/orders for the first half of 2013 have continued to push the bar higher. The Robotic Industries Association estimates that some 230,000 robots are now in use in U.S. factories, placing the United States second only to Japan in robot use.

The potential for continued growth is significant as advanced manufacturing processes continue to gain a foothold. Some industry sources estimate that only about 10 percent of U.S. companies that could benefit from robots have so far installed them. In particular, the 300,000-plus small to medium-sized U.S. manufacturing companies represent significant growth opportunities as more of those firms embrace automation, notes Doyle. Factors that will continue to fuel that growth include reduced costs for robotics systems, as well as an explosion of new technologies in the robotics field that have made user interfaces simpler, improved gripper technology, and created better vision-guided systems that have opened up new manufacturing opportunities for the use of robots.

Will Automation Fuel Growth?
Advanced manufacturing processes could provide just the boost that the manufacturing industry needs to regain some of the footing that it has lost over the years. Manufacturing remains an important force in the United States, contributing $1.87 trillion to the economy in 2012. Yet the industry has seen jobs disappear, and its contribution to GDP has diminished over the years from a high of 26 percent in 1947 to its current level of about 11 percent.

The manufacturing industry is still working to regain the 2.3 million jobs that it lost during the recession. So far, the industry has added back about 500,000 jobs. Manufacturing production is only 73 percent recovered compared to pre-recession levels of December 2007, with a full recovery still about a year away (i.e., fourth quarter 2014), according to data from the Manufacturers Alliance for Productivity and Innovation (MAPI). In addition, exclude the high-tech segment of computers, semiconductors, and communications equipment, and those projections drop to only 64 percent recovered with a full recovery that is not anticipated until the third quarter of 2015.

“Overall, firms are profitable. They have low debt and high cash ratios, and interest rates are the lowest they have been in decades,” says MAPI Chief Economist Daniel J. Meckstroth, Ph.D. “One would expect in this environment to see very strong growth in new investment. Unfortunately, we have not seen that.”

New business equipment orders have been modest. Demand for goods also has been held back by more conservative consumer spending, as well as by uncertainty earlier in the year related to concerns about the impact from sequestration and the fiscal cliff. However, there are signs that those orders are accelerating, which bode well for manufacturers, adds Meckstroth.

Manufacturers do appear to be gaining confidence in the recovery. According to a second quarter Manufacturing Barometer survey conducted by PwC, 82 percent of industrial manufacturers predict revenue growth in 2013. Another positive sign that the recovery is on track is data from the automotive sector that shows that vehicle production has once again reached pre-recession levels. Yet manufacturers remain hesitant in capital spending, which will continue to hinder investment in new jobs, equipment, and facilities. With regard to capital spending, 40 percent of survey respondents plan major new investments during the next 12 months, which is down from the 55 percent recorded in the second quarter of 2012, according to PwC.

The Necessary Infrastructure
One of the keys to fostering growth in advanced manufacturing is providing the necessary infrastructure — skilled labor, access to innovation related to R&D and engineering, and strategic locations. As greater automation is driven into the manufacturing process, it is putting more emphasis on locating in areas that have those resources in place. At the top of the list is demand for a skilled work force and resources to assist with the ongoing training and development of such workers. There is recognition at all levels — from industry and government — that there needs to be a greater focus on science, technology, engineering, and math (STEM) to create that skilled work force in this country, says Matt Highfield, a director at Deloitte Consulting LLP who specializes in global location strategy. “I think that is something that is slowly being addressed,” he notes.

Those communities and those educational partners that are successful in producing a work force with STEM skills will be more successful in growing and attracting manufacturing businesses. Continued investment in the community and technical college network is critical, and that also has to be done in partnership with manufacturers, so that the pipeline of talent is aligned with their needs, says Highfield. One good example is the Center for Advanced Vehicular Systems (CAVS) at Mississippi State University, which is partnering with a number of auto manufacturers in the region to improve processes and bring further innovation to auto manufacturing, he adds.

“The importance of state and local industrial training programs has risen in the past few years in terms of the priority clients — and states — tend to place on it to train new skills and to maintain the skill base as the manufacturing/ production work force turns over,” agrees Andy Mace, managing director, Global Business Consulting, Supply Chain Solutions for Cushman & Wakefield. Companies need to begin planning and investing in training earlier in the planning and implementation processes of their facility initiatives. States that also are seeing greater competition for those industrial businesses need to be particularly focused on it, he adds.

Each institute would serve as a regional hub designed to bridge the gap between basic research and product development, bringing together companies, universities and community colleges, and federal agencies to co-invest in technology areas that encourage investment and production in the United States. Ultimately, the goal is to create a unique “teaching factory” that allows for education and training of students and workers at all levels, while providing the shared assets to help companies, including small manufacturers, access the cutting-edge capabilities and equipment to design, test, and pilot new products and manufacturing processes.

The factories of the future are going to be “lower touch” and more highly automated, notes Highfield. They are going to have higher capital expenditures with a lower labor component, which will also translate to higher skills and higher-paying jobs. In theory, those factories will be more efficient and will be able to produce more, as more automation is introduced. Yet there needs to be a shift in education and perception about what constitutes a manufacturing job. Manufacturers will need to work to dispel perceptions that manufacturing jobs are “dirty, dull, and dangerous” and to put forth the notion that they represent not just jobs, but career opportunities, he concludes.