City of Rochester (NH) Finds an Educated Workforce Is Critical to Business Success
An aerospace composites facility relies on the area’s technology training resources in order to train its workers in next-generation technology.
Area Development Research Desk (2015 Auto/Aero Site Guide)
{{RELATEDLINKS}}The suburban city of Rochester, New Hampshire, is modernizing its centuries-old manufacturing tradition by shifting to space-age production, focusing on leading-edge sectors such as composite materials, medical devices, and aerospace equipment. The Granite State Business Park is home to a state-of-the-art aerospace composites facility more than eight acres in size and utilizing not just the latest in manufacturing technology, but actually creating specific new technology to make composite engine components for the next-generation LEAP engine. The engine components, as well as this 343,000-square-foot facility, are the result of a unique partnership between Albany Engineered Composites, a division of U.S. Albany International Corp., and Safran Engineered Composites, a division of the French firm Safran, a global leader in jet engines and aerospace components. 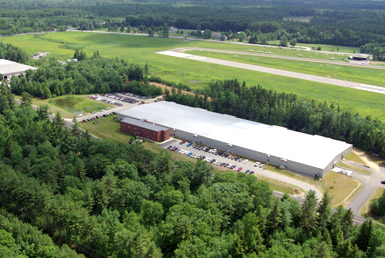 Albany Engineered Composites facility
Satisfying the need for a large number of skilled and semi-skilled employees to be ready at the opening of the facility was one of the greatest challenges of the location process. In response to those needs, Great Bay Community College Advanced Technology & Academic Center (ATAC), which opened in March 2012, offers a focus on technical composites manufacturing and academic courses for job-seekers and business owners throughout the region. It was recognized in 2014 as “Project of the Year” by the Northeast Economic Developer’s Association. “We are proud and grateful for this award, which represents the culmination of a lot of hard work by people at both the state and local level,” said Great Bay Community College President Will Arvelo.

In 2015, the college expanded the Advanced Technology & Academic Center (ATAC). It is currently teaching the sixth cohort of students enrolled in the Advanced Composites Manufacturing Certificate program, graduating students every four months. According to Debra Mattson, the curriculum designer, out of the 20 students who recently graduated, all are currently employed. The program is growing from 60 graduates the first year to more than 200 graduates this year.

Earlier this year, Albany International CEO Joe Morone praised the City of Rochester and the collaboration of Great Bay Community College Advanced Technology and Academic Center, as Albany and Safran prepare to kick their manufacturing production into high gear, noting that the center and the educated workforce “are critical to our success.”