What’s Driving Today’s Location Decisions in the Auto Industry?
A healthy recovery in the auto sector is leading suppliers to consider new facility and expansion plans; smart decisions today will give them an edge over the competition in the years to come.
Larry Gigerich, Executive Managing Director , Ginovus (2013 Auto/Aero Site Guide)
{{RELATEDLINKS}}Site selection decisions made now will have a dramatic effect on a company’s long-term viability. The economic landscape of today is much different than 10 years ago, and it’s likely the economic landscape in 10 years will change dramatically from what it is today. Companies with the best information and processes, with regard to the location of a new facility, will position themselves for success down the road. This is important for all industries, but especially transitional ones like the automotive sector.

Location Modeling
Advanced manufacturing has evolved a great deal over the last decade, and along with it has come a high demand for skilled workers. This challenge is intensified when an automotive manufacturer is seeking the best location for a new, expanded, or relocated operation. Companies need to not only identify prospective sites, but also carefully analyze their suitability for their respective needs. From the perspective of the overall real estate market, including brownfield redevelopment and greenfield site development; transportation infrastructure; susceptibility to natural disasters; proximity to competitors and vendors; labor market conditions; and economic impact studies; sites must be examined for their current value and future impact to the company’s operations.

In the automotive industry, however, some site selection factors weigh more heavily than others, to the point where it is not only a question of thorough analysis, but also of interpreting the signs of the future. This type of understanding may be a most influential and critical factor for the industry in years to come.

A case in point involves one of our automotive clients, MAGNA Drivetrain, a Tier I supplier of drivetrain components and systems for light trucks and automobiles. Several years ago, MAGNA was looking to increase its manufacturing and assembly capabilities near one of its existing plants in Lansing, Michigan. MAGNA supplies components to DCX, GM, Ford, Toyota, and Honda. Phase I of the project included a 200,000-square-foot building consisting of manufacturing, assembly, logistics, and office space, and the ability to expand the building as the company was awarded new contracts from its customers.

As noted above, there is always a complex array of issues unique to the automotive site selection process. In this case, land availability, transportation infrastructure and supply chain issues, as well as economic development incentives could offset both short- and long-term operating costs. Appropriate land and existing building options to accommodate MAGNA's current and future needs were some of our earliest considerations for the site selection process. Real estate requirements included utility infrastructure, properly zoned land, major interstate highway access, a preference for rail service, and a location within a triangle whose corners were Indianapolis, Indiana; Lansing, Michigan; and Dayton, Ohio.

Supply-Chain Factors Drive Growth in the Midwest
States such as Kentucky, South Carolina, Tennessee, Georgia, and Alabama have seen tremendous growth during the last 20-25 years. There has been strong growth in southern states from manufacturers like BMW in South Carolina and the recent large expansions in Alabama of Mercedes (expecting 1,400 new jobs in 2013 and making a $2.4 billion investment in an expansion project) and Toyota (125 new jobs and an $80 million investment in the project). Suppliers to the industry will likely be considering these hot areas for their expansion and relocation projects as well.

However, for now, many supply-chain factors still favor the Midwest for certain types of projects due to efficiencies found in manufacturing plants located within the region. In October 2012, the Indianapolis NBC affiliate, WTHR, reported that Indiana alone had approximately 600,000 people (or 14 percent of the state’s work force) employed in the automotive industry.

General Motors, Chrysler, Ford, Toyota, Honda, and Subaru are all major employers in the state. There are over 370 suppliers to the automotive industry located in Indiana — proving strong support of the industry in the Midwest. With this growth, Indiana has moved to third in the nation for automobile manufacturing, just behind Michigan and Ohio.

Indiana along with the remaining Great Lakes states of Illinois, Michigan, Minnesota, Wisconsin, Ohio, Pennsylvania, New York, and the Province of Ontario have a combined economic output that — were the region a country — ranks fourth in the world behind only the United States as a whole, China, and Japan. This impact has increased due to the resurgent automotive sector.

According to the May 2013 BMO Capital Markets Special Report, “North American car and truck production is back to pre-recession levels, global demand for machinery and equipment has firmed, and the service sector remains sturdy.” Auto sales have risen to the best level in five years, resulting in a 20 percent gain in automobile production in 2012 in Indiana. The strength and growth of the auto industry filters through all aspects of the region’s supply chain, which needs solid infrastructure and transportation support.

Proximity to railroads and ports as well as highway infrastructure will continue to play an important role in the site selection process. Manufacturing components come through various points in North America, and the distance to and from suppliers, competitors, and customers is a key issue to consider. Suppliers often want to be close to as many customers as possible to offset their inventory and logistics costs, as well as be able to provide the “just in time” availability of parts. As an example, our site location modeling and analysis for MAGNA began with research on the number of engine and transmission plants within a 450-mile radius of the specified locations.

There is constant pressure to drive excess costs out of the OEM supply chain. Moving forward, companies will need to make capital investments to stay competitive. Investment in research and development, and flexibility to adjust to consumer preferences and global market needs, will be critical for long-term success. 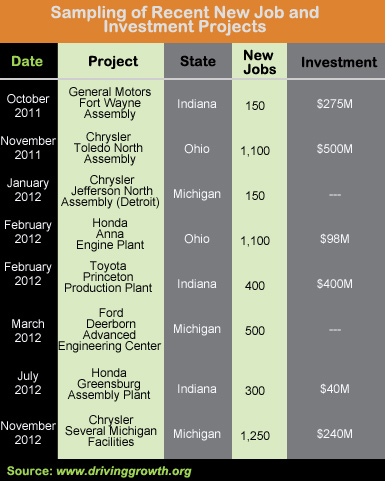 Clustering Affects the Location Decision
Automotive clusters can also have a significant advantage in a site location decision in that they impact capital investment decisions. In the Midwest, research and innovation infrastructure is driving the development of new products and processes. Within the Great Lakes region, Michigan, Ohio, and Illinois are among the top states in terms of green-tech patenting, focused on new technologies in battery power, hybrid systems, and fuel cells.1 Stronger U.S. automotive standards result in higher volumes of fuel-efficiency, components, and advanced vehicles.

The push for these volumes has justified an on-shoring movement by many large manufacturers, i.e., a justification to produce locally, whereas, in the past, advanced vehicles would have been built overseas. Toyota and Honda have brought hybrid production to the United States and Ford Motor Co. is now producing hybrid transmissions in Michigan instead of buying them from Japan. These changes have resulted in job growth and investment. From June 2009, when the auto industry hit bottom, to October 2012, industry jobs have grown by 236,600. More than 25 percent of the total U.S. growth in the auto sector was in Michigan, Ohio, and Indiana (66,300 jobs since June of 2009).

Next: Incentives Come Into Play

{{RELATEDLINKS}}Incentives Come Into Play
In view of the fact that automotive projects are capital-intensive, it is important to identify appropriate and available economic development incentives to offset both start-up and ongoing operating costs. A key component in the MAGNA project was the availability of local and state governmental financial assistance to support the project.

In addition, the Indiana Department of Workforce Development provided funding to match job-seekers’ skill levels to particular company job requirements, which helped MAGNA put together its new team in a very efficient manner. The local incentive package also included funding for the purchase of land, environmental testing of property, public infrastructure improvements, and Tax Increment Financing (TIF). Of considerable advantage to MAGNA was the selection of a site within a Community Revitalization Enhancement District (CReED). This economic development incentive program allowed the company to receive significant financial benefits in the form of tax incentives tied to qualified capital expenditures and job creation related to the generation of new taxes from the project.

Labor Is Still Paramount
Demand for the right kind of labor for the right price will continue to be a driving factor, more important than the aggressive incentives offered by a city or state. The aforementioned shift in automotive plants to southern states occurred for a number of reasons: low wage rates, lower cost utilities, non-unionized labor, less expensive land, lower freight costs, lower taxes, and market share redistribution from traditional domestic manufacturers to Asian and European companies that manufacture in the South. The traditional automotive industry unions have not been embraced by employees in the South’s right-to-work states. Recently approved right-to-work legislation in Indiana and Michigan has also positioned these states for more success with domestic and foreign automotive manufacturing facilities.

Training and human resources in any industry can and should be shared whenever possible, especially where employees with technical expertise are required. The availability and ease of such shared resources is an important factor in the site selection process. The automobile industry has growing concerns about finding, hiring, and retaining qualified employees for today and for the next 10 to 20 years. The October 2012 Original Equipment Suppliers Association (OESA) newsletter noted that the number-one risk for suppliers meeting short- and long-term business objectives is human resource-related issues.

Seeking new labor pools, competing against non-automotive industries for talent, accommodating flexibility and diversity work force requirements, and identifying and filling the talent gaps are all issues that the automobile industry is facing. As the industry grows, and as additional technology solutions are implemented, there will be a continued growing need for a highly trained work force. Innovative fuel cell technologies, mechanical engineering, biofuels, and advanced battery technologies will require a new breed of worker to support an every-changing automotive industry. The need for flexibility and the ability to adapt and respond to new technologies as they develop will become increasingly important as global competition increases.

Flexibility and Foresight
Automobile manufacturing is still big business and thanks to a healthy recovery, vehicles in operation globally exceeded one billion in 2012. Six large companies, rather than three, now dominate the industry: Chrysler, GM, Ford, Honda, Nissan, and Toyota. These global companies represent an overwhelming majority of automotive sales in the U.S. marketplace. In the coming years, these companies will continue to face challenges and uncertainties. Flexibility, innovation, and foresight will be needed to deal with new issues that affect manufacturers and suppliers. Smart site selection decisions today will give companies an edge over their competition and allow them to draw on an array of resources available to take them into the next wave of automotive production and distribution.